As a native of Jersey City, NJ and with over 20 years of acting experience, Alison has decided to uplift and educate new and seasoned actors! She started performing in church plays for Christmas and Easter and later performed at golf tournaments with a group of school kids to raise funds for her elementary school. It was then when she realized acting was her hobby! After taking drama class in high school and performing in several shows she realized her hobby became a passion.

She holds a Bachelor of Arts from William Paterson University including a degree in Mass Communications and a concentration in Theater. Alison has participated in several play productions both on and off campus throughout her college years and realized her passion was a talent given to her by God.

The relationships formed in past plays, musicals, independent films, TV shows and talk shows have been remarkable. After college, Alison continued to better herself via numerous workshops, seminars, conventions and film festivals around the country. Just within the past few years, she has used the latest information to train other actors and helping children around the world to experience the art of acting. Her experience extends behind the stage where she stage managed the musical "Underneath It All" directed by Tony Williams and Kareem Jones for a 2 year run with a cast of over 25 actors. As an actor, writer, director and assistant casting director for a children’s pilot TV show in pre-production she continues to encourage others to find their talents and gifts!

Her desire is to uplift and educate the community through quality art productions by helping talent who has a desire to share their gift of creativity with the world. UTAP was founded after reading Matthew 25:25 And I was afraid and went and hid thy talent in the earth: lo, there thou has that is thine. Alison believes in using your talent for Christ to uplift the Kingdom of God! 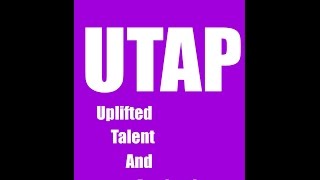